Makes you feel small, doesn’t it? 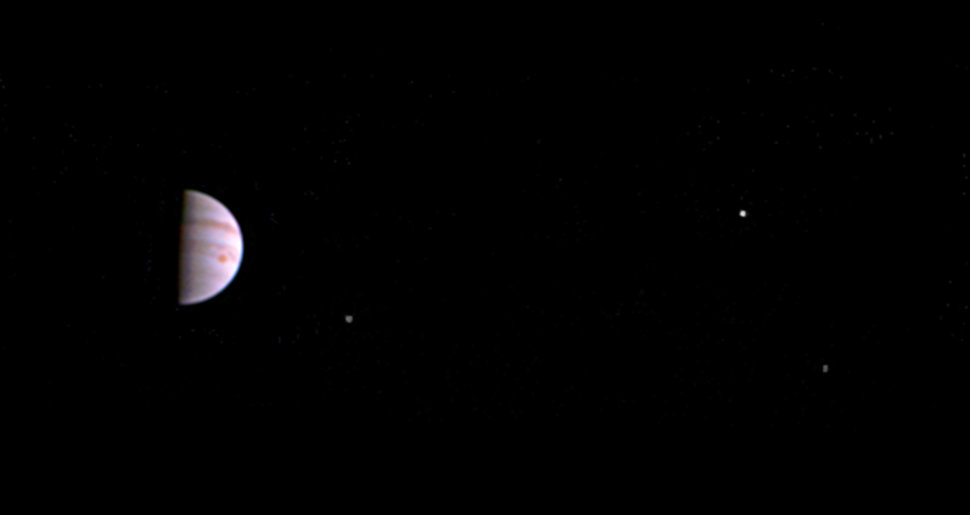 Jupiter and its Great Red Spot can be seen in this first image released by NASA. From left to right, the moons Io, Europa and Ganymede can also be seen.

NASA has released the first image taken by the Juno spacecraft while in orbit of the solar system’s largest planet. The color photograph, above, showed Jupiter and its famous Great Red Spot alongside three of the planet’s four largest moons: Io, Europa and Ganymede.

The image was taken on July 10 some 2.7 million miles from Jupiter as Juno worked through the outbound leg of its initial 53.5-day orbit, according to a release from the Jet Propulsion Laboratory. Aside from being breathtaking, the photo also served as proof that the spacecraft’s JunoCam had survived the journey and its first pass through what NASA described as Jupiter’s “extreme radiation environment.”

Juno arrived in Jupiter’s orbit on July 4 after traveling for five years and hundreds of millions of miles. Scott Bolton told his team the $1.1 billion mission was “the hardest thing NASA has ever done,” citing the extreme environment and intense speed at which Juno was flying towards the planet.

“We’re … moving faster ― about 165,000 miles an hour ― than anything we’ve ever had. We were moving past Jupiter, relative to the Earth, faster than any spacecraft has ever gone,” Bolton told The Huffington Post.

Juno will circle the planet for the next 20 months, completing 37 orbits and swinging as close as 2,700 miles to Jupiter’s surface. It’ll take about four images an hour, The New York Times reported.

The first high-resolution image will be snapped on August 27 when Juno makes a close pass of the planet. Scientists should get the first good views of the north and south poles at that time.