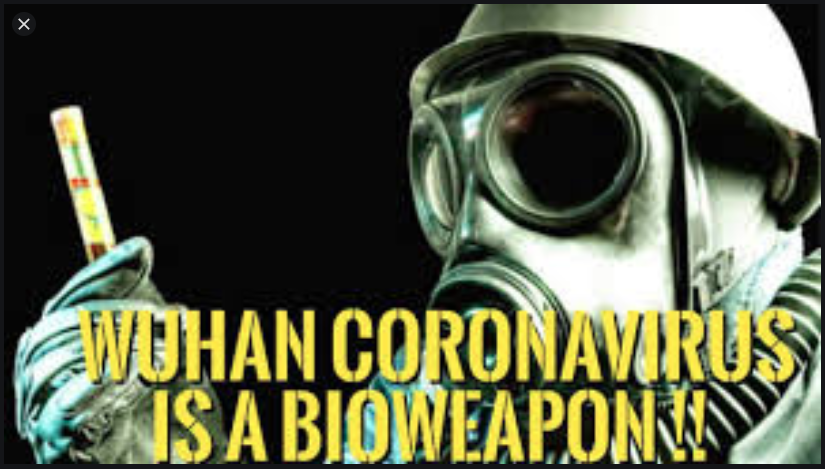 A Strong Case for Premeditated Act(s)
of Bioterrorism in Wuhan City, China
Carried Out by Paid Agents of the
Zio-Anglo-American Axis

SPECIAL NOTE: The Wuhan bio-attack appears to be just
one in a series of ongoing biological attacks being conducted
throughout mainland China.  This Zio-Anglo-American bio-
terrorist operation is being stealthily perpetrated to give the
appearance that the national epidemic started with a single
case in Wuhan City, when it’s still be surreptitiously spread
in other Chinese cities via similar modes of propagation.
Because the vectors of dissemination of this weaponized
coronavirus are mapping worldwide at rapidly expanding
rates, there are quite likely multiple methods of prolifera-
tion which are being cunningly implemented to confuse the
medical investigators as well as to avoid detection.

The following excerpt from a previous SOTN exposé on the Wuhan coronavirus pandemic tells one of the most critical parts of the quickly unfolding back story.

“In light of the US-staged Hong Kong protests, U.S. tariff regime against China, threat of economic sanctions against nations working with Huawei, CIA-inflamed Xinjiang conflict involving the Muslim Uyghurs, provocative sailing of US Navy warships through the Taiwan Strait, transparent political prosecution of Huawei’s CFO, ravaging of China’s pig farms by another DARPA-bioengineered virus, etc., the Chinese government has been under withering attack since 2018.”
(Source: WUHAN CORONAVIRUS PANDEMIC BIOENGINEERED: Who’s behind it, why now and why China?)

With the crucial understanding provided above, the true intent and timing and nature of this ever-increasing series of transparent biological attacks ought to be much easier to correctly comprehend.

China has been earnestly pursuing economic development and commercial outreach throughout the world community of nations for many years.  Those various business-development pursuits have been intensifying over the past decade.  The Belt and Road Initiative is just one example of how serious China has been to forge a whole new Global Economic & Financial System (GE&FS) free from the incessant economic sabotage and financial terrorism perpetrated by the United States (and more covertly by the United Kingdom).

This new and swiftly emerging Global Economic & Financial System is being built without the domination of the many Western powers that constitute the Anglo-American Axis (AAA).  The British and American establishments are especially being excluded.  That means that the once Almighty Dollar will have no place in this immense Chinese-Russian-Indian project to remake the global economic and financial order.

This also means that the Almighty Dollar will be dethroned as the world’s reserve currency.  Which is a very BIG thing for the Western powers.  In point of fact, it doesn’t get any bigger than this.  Unless, the West agrees to a level playing field not dominated by London and New York City, they will go the hapless way of the greenback.  By the way, in the grand scheme of things, that’s called karma.

Given the carefully controlled demolition of the US petrodollar by the Eastern powers which has been undertaken since 9/11 out of sheer self preservation, the US, UK, Israel and other AAA-aligned nations have grown desperate—VERY DESPERATE!

KEY POINT: All of the nations that comprise the Anglo-American Axis have hitched their wagons to the US petrodollar.  Were that wagon train to go over the cliff with the collapse of the US dollar, the international order will change [MAJORLY] in a day and a night.  Rogue, criminal, apartheid nation-states like Israel will essentially be defenseless without the U.S. military protecting their citizenry and far-flung interests; so Tel Aviv has a LOT to lose and they know it.  Great Britain will also fold without America to fleece as the Financial District in the City of London does 24/7.  Hence, we see this pandemic as a reckless attempt by colluding Zionists in every AAA nation to destroy the RIICS economic alliance in order to maintain Western hegemony.*

There is simply no better way to shut down another country than to wage the most calamitous forms of biowarfare.  When carried out with perfect timing as the Wuhan bio-attack was; in the perfect location as this bioweapon release was; with the most effective bioengineered infection agent which the Wuhan coronavirus is, all hell breaks loose… … …and the targeted nation is paralyzed to a great extent with purposeful design.

The Middle East Knows the Truth—>ZIONISM

The preceding screenshot was taken from this article: “The Coronavirus Is Part Of Biological Warfare Waged By The U.S. Against China” — MEMRI

More than any other region of the planet, scientific researchers and investigative journalists alike throughout the Middle East appear to be fully abreast of the “Who” and “Why” behind this bioengineered coronavirus pandemic.

They especially are aware of the answer to the pivotal question: “Cui bono?” from this devastating epidemic that has isolated China as no other event in its history.

For example, here’s an excerpt from the above-referenced MEMRI article that has some penetrating insights and radioactive revelations:

Egyptian Writer: The U.S. Spread The Virus To Harm China’s Economy And Reputation

On the Egyptian news website Vetogate.com, Egyptian journalist Ahmad Rif’at explained why the U.S. chose the Chinese city of Wuhan as the epicenter of the disease: “American factories are the first to manufacture every kind of virus and bacteria, from the virulent smallpox virus and the bubonic plague virus to all the viruses we saw in the recent years, such as mad cow disease and swine flu. Wuhan, the city that has now been struck by the corona [disease], is an industrial town, but it is nevertheless the eighth-richest city in China, after Shanghai, Guangzhou

Guangzhou, Beijing, Tianjin and Hong Kong are the country’s major cities. Its place at the bottom of the list [of China’s major cities] is what makes it a suitable [site] for an American crime… for it is not a focus of attention, and the level of healthcare there is surely lower than in the larger and more important cities.

“All that is needed in order to let a virus spread quickly is to release it from some bag, using an ordinary syringe or in any other way. But the really interesting fact is the large number of Americans who were staying in Wuhan and decided to leave it immediately and quickly, [as was shown] on American news channels, among them a CNN reporter, even though none of them contracted [the disease]! We don’t know what that [CNN reporter] was doing there. Did he come to report on the events? If so, why did he leave so dramatically? Did he arrive there before [the outbreak of the epidemic]? [If so,] what caused him to go there before the coronavirus crisis began?…

“This war is not only intended to worry China, trouble it and cause it to spend billions of dollars on emergency measures and medicines – which, by the way, will be manufactured by an Israeli company… The U.S. wants to inform the world, and especially China itself, as part of a propaganda war  targeting [China’s] prestige and status,  that [China] is still a backward country whose citizens eat bat soup and which exports diseases and epidemics to the rest of the world!”[4]

The bottom line to the “Cio bono?” question is that Zionism always wins, while everyone always loses.  China and Russia both lose.  So does Iran.  The US and UK will ultimately lose even though they might look like winners.  India and Pakistan both lose.  The entire Middle East loses again except Israel.  Just watch how this pandemic evolves across the planet and we shall see who really started it from their safe haven.

As far as biological attacks go, it really doesn’t get any bigger that OPERATION CORONAVIRUS BIO-TERROR.  Because of that reality, unpacking the multi-nation conspiracy that is also implementing an extremely organized cover-up has been quite difficult.

Obviously, the forces behind this bio-attack are the very same state actors that exert total control over the Mainstream Media.  Of course, everyone now knows who owns and operates the CIA’s Mockingbird Media where each major organ of MSM propaganda repeats that same fake news and false narratives conjured up at The Company headquarters in Langley, Virginia.*

*The Central Intelligence Agency is well known as The Company within intel circles the world over.

This is exactly how The Powers That Be run their unending psyops against humanity.  They can hype any story they so desire … or kill any story in a New York minute.  That’s because the entire corporate media is completely controlled by the International Banking Cartel.  The same banksters rule every sphere of life in America today with an iron fist.  As follows:

This Wuhan coronavirus pandemic has already proven to be one of the most distorted and propagandized in modern history by the ever-prevaricating corporate media.  That fact alone demonstrates that this pandemic saga is being manufactured to function as a global psyop.  And, the amount of obvious disinfo, misinfo and false info issuing forth from the MSM reflect that.  The relentless China-bashing and outright fear-mongering associated with every aspect of this Deep State black operation proves this now irrefutable truth.  (Yes, this is an exceedingly serious state of affairs but the MSM is pushing the psyop fear porn not the vital facts.)

CAVEAT: Evidence of a fastidiously bioengineered coronavirus bioweapon is materializing by the day, which is why it’s imperative that everyone watch this video:
WUHAN CORONAVIRUS BIOWEAPON: Bioengineered with Virulence Associated Protein (Video).  Then, given the correct understanding of just that one aspect of the Wuhan coronavirus via that sound scientific explanation, it would be wise to follow this advice: Here’s How Everyone Can Avoid Getting The Coronavirus

Editor’s Note: SOTN has been receiving a plethora of evidence from around the world which will prove that what we are presently witnessing is a full-scale bio-war against China. Therefore, this important post is still very much a work-in-progress. The most essential pieces of this biowarfare puzzle are still surfacing and slowly being put into their proper places. Our readers are encouraged to check back for the most significant revelations yet to be posted when this article is soon completed. SOTN’s first article regarding this highly consequential matter of global import does have a continuing “Update” section with many significant developments and urgent disclosures. See: OPERATION CORONAVIRUS BIOTERROR and scroll to the bottom of the post.

‘The Father of the Coronavirus Virus is the CDC’, Planted in China by the C.I.A.