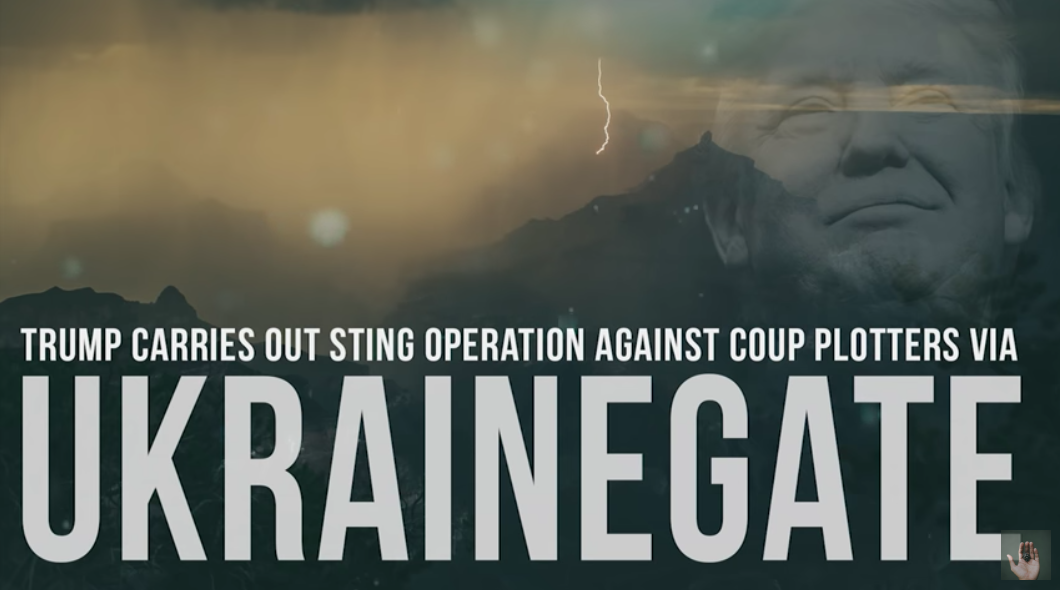 “Trump knew he risked impeachment by exposing multiple
Democrat scandals in the Ukraine. However, he had no
choice. Trump knows his vindication lies with revealing the
Deep State corruption perpetrated  in Kiev by the Obama
administration. The Biden Crime Family set up a full-blown
criminal enterprise with Burisma warranting a RICO
prosecution. Plus, the CrowdStrike server proving the DNC
hacked their own servers is housed in the Ukraine. More
importantly, if there was a highly organized foreign
conspiracy to steal the 2106 election, it was executed
by the Democrats in Ukraine.  Then there was the Clinton
scheme to start WW3 against Russia by using Kiev to
attack Russian-speaking eastern Ukraine.”

Truly, it all comes down to the Ukraine. Or, rather, UKRAINEgate.

President Trump has known this all along, but he’s been biding his time before blowing it all wide open … which he has now done—BIG TIME!

The preceding link spells it all out. Trump had to make himself vulnerable in order to expose his enemies and especially the enemies of the American Republic.

Having done so, it’s now just a matter of execution, both figuratively and literally. The various unparalleled scandals associated with the Ukraine will each be revealed in graphic detail henceforth.

With the gory details of each CIA-coordinated criminal conspiracy to commit high crimes and misdemeanors by Obama’s lawless administration, the noose will surely tighten around the necks of so many Democrat corruptocrats, Deep State traitors, Intelligence Community coup plotters, Big Tech corporate criminals and Mockingbird Media cover-up artists.

If the following bombshell news report foreshadows just a fraction of the rampant crime and corruption carried out by the Biden Crime Family, Joe and Hunter are in big, BIG trouble.

The sheer depth and breadth of the Biden crime spree committed over two Obama terms in the Ukraine is as stunning as it is inconceivable. That the Vice President of the United States — JOE BIDEN — would state so brazenly state that he got a Ukrainian prosecutor fired who was ready to investigate his own son for committing crimes against the state and its citizens is quite incomprehensible. Nevertheless, there you have it: Joe Biden Brags about getting Ukrainian Prosecutor Fired (Video).

Of course, there are very good reasons why point man Rudy Giuliani is taking so much heat. Not only is Rudy Trump’s personal counselor, he’s also his PI for ferreting out the numerous criminal conspirators who attempted to steal so many Ukrainian assets and citizen wealth. Hence, compared to the previous bombshell report, the one below is like the “Mother of all Neutron Bombs” where all the career crooks are taken out while the buildings are left standing.

Now that BIDENgate has been blown wide open, surely SOROSgate and CROWDSTRIKEgate will quickly follow.

KEP POINT: What Soros did to the Ukraine he does in collusion with the U.S. State Department around the globe.  When the U.S. gives a $400 million aid package to the Ukraine, most of that money is taken in the form of outright graft, kickbacks, bribes, inflated contracts with the Military-Industrial Complex and other types of financial malfeasance.  One thing is certain: that kind of money ends up right back in the pockets of the hopelessly corrupt American politicians, lobbyists, lawyers and banksters who are anywhere near the scene of the crime spree.

It doesn’t get any bigger than SOROSgate.

How George Soros has avoided scrutiny (and prosecution) when so much corrupted U.S. foreign policy comes down to his malevolent influence is a case study in the ponerization of American government. See PONERIZATION: How the American Republic was taken over by political cliques of criminally insane psychopaths

No other nation in Eurasia has been so abused and misused by the Soros Crime Syndicate as the Ukraine.  Soros has in fact taken advantage of the endemic and paralyzing corruption that Ukraine has experienced over several decades.

The long-time Soros MO is first to take over the U.S. State Department personnel where it concerns each and every nation-state that the Soros Crime Syndicate aims to first exploit and then take over. See: Soros Controls Large Swaths of the U.S. Department of State — Former U.S. Attorney

There’s no department within the U.S. Federal Government that is as powerful and influential throughout the planetary civilization as the State Department.  The power elite know this quite well and have, therefore, strategically stationed consummate manipulators like Soros.  Soros is a flaming front-man for the International Banking Cartel; in fact, there are many other bagmen who have likewise taken over different parts of the U.S. State Department.

The U.S. State Department has its own Very Deep State

As far as the President is concerned, CROWDSTRIKEgate is the real megillah. Once that Democrat criminal conspiracy and immense fraud perpetrated against the American people is fully disclosed, everything changes in a day and a night.

As for the back story, the following link presents many of the most pertinent details and criminal elements.

CROWDSTRIKEgate: A Massive Deep State Scandal that Will Collapse the Democrat Party

After the mainstream media is compelled to publish the many inconvenient truths and hard evidence associated with CROWDSTRIKEgate (under threat of being prosecuted as a co-conspirator), Trump will be able to show the whole world that the RUSSIAgate hoax was itself an enormous criminal conspiracy fabricated by the highest echelons of the Obama administration and U.S. Intelligence Community.

Once that happens, President John F. Kennedy’s greatest vow will come to pass through the deliberate and justifiable executive actions of President Donald J. Trump. What timing that these extraordinary revelations have occurring around November 22, 2019, the 56th anniversary of JKF’s assassination by his own Central Intelligence Agency. How fitting it is that the C.I.A. will be the first institution within the U.S. Federal Government to be dissolved in this presidential undertaking to drain the swamp. After all, it’s now been proven that the entire impeachment scam is nothing but a SUPER-PSYOP! The whole thing was set up as a CIA-directed presidential entrapment scheme.

KEY POINT: The pure genius of Trump in triggering the Democrats to blow wide open their own scandal will go down in the history books as the greatest sting operation—EVER!  It’s entirely true, however, that the Deep State had no choice but to go after Trump.  After all, when CROWDSTRIKEgate is exposed, they know that the communist Democrat Party will effectively cease to exist.  Moreover, the secret plan to start the hot phase of World War III with Russia will also be outed.  This is why hardcore Russophobe Adam Schiff was put in charge of the impeachment inquiry.

Very few folks are aware, but there is much more at stake here than fending off the ongoing soft coup, or even averting a full-scale violent coup d’état. As follows:

Not only is Trump determined to take back the country from those who have stolen it, he’s also thwarting the premeditated collapse of the American Republic.

However, there are HUGE obstacles to be overcome if the POTUS is to be successful. These challenges can only be met with the full support of the Patriot Movement as the time will certainly come when the Democrat traitors and Deep State co-conspirators will find themselves cornered. That’s where the rubber meets the road, and every patriot needs to be locked and loaded—FOR REAL.