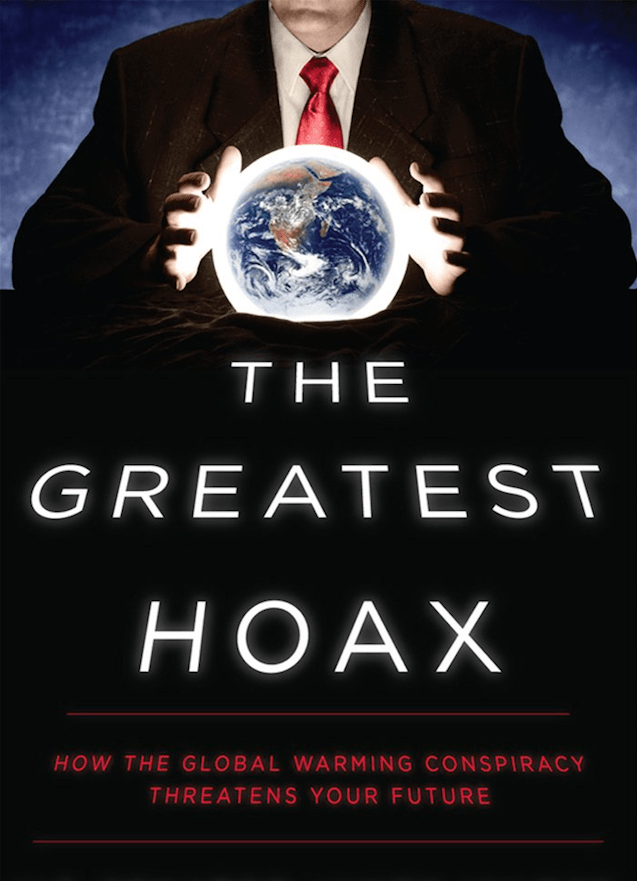 The whole world has been suffering tremendously from a highly premeditated and complex hoax initially known as Global Warming.

When this carefully packaged fraud did not pan out, the New World Order globalist cabal repackaged the unparalleled scam as Climate Change.

What is critical to understand is that the globalist perps have been stealthily geoegineering climate change for decades so that it will appear to be taking place in a much worse way.  Clearly, there is unprecedented atmospheric flux occurring planet-wide, but the geoengineers are manufacturing it on a regular basis.

A daily look at the sky presents the most obvious evidence as to how they are conducting solar radiation management and water vapor production (H2O is the most abundant greenhouse gas) via chemical engineering techniques.  These ongoing chemtrail operations have been proven with various video and photo-documentaries such as this overwhelming presentation: CHEMTRAILS: A Planetary Catastrophe Created by Geoengineering

KEY POINT: The planet has been experiencing wild and wacky weather for decades now; however, it’s the geoengineers who are primarily responsible for the unprecedented meteorological chaos.  Hence, it can be stated with absolute certainty that: Geoengineering Is The Primary Cause Of Global Climate Change, Not CO2.

There are other valid reasons for both the unpredictable weather and climate chaos tormenting planet Earth.  Most of these scientifically proven factors are well explained in the following extended essay.

Global Climate Change: A Definitive Essay On The Primary Causes Of Global Warming soon to shift to Global Cooling

The Global Warming narrative actually began quite naturally, but was then quite purposefully hijacked and manipulated by malevolent forces determined to dominate the entire planetary civilization.[1]   As follows:

The Back Story:
This is what TPTB did.  They saw that the planet had entered a period of natural and very gradual global warming.  This occurred during World War II when they had to track the weather very closely for wartime purposes.  The steady warming of the planet paralleled the same period when the Oil & Gas Industry really began to take off and the global population explosion first began.  At the time when the data really started to pour in, the warming was just a “small campfire” … this was early on, right after World War II.  Soon after they first made those observations about the slow warming of the planet, the decision was made to turn the little campfire into a raging wildfire.  They experimented with HAARP and used chemtrails and other advanced geoengineering technologies to ramp up the heat worldwide.  Eventually the wildfire of global warming was stoked sufficiently so that full-blown forest fires, brush fires and grass fires were jumping off anywhere and everywhere. In this way, the synthetic component of Global Warming was fabricated on top of a very real phase of planetary heating.  The next part of their plan was to fabricate the patently false narrative known as the human activity CO2-driven climate change scam.
(Source: New World Order: Where Geoengineering Via HAARP and Chemtrails Meets The Global Carbon Control Matrix)

Only with this correct understanding can the true depth and breadth of the furtive NWO plot to take over the world be properly comprehended and responded to.

But, first, it’s important to be aware of the financial and economic, fiscal and commercial drivers of this massive out-of-control Climate Change juggernaut rolling across the 7 continents.  For it is the secret society of banksters known as the International Banking Cartel and their “Global Money-Making Scam”, that is continuously co-opting Fortune 1000 corporations and national governments, which is at the heart of this “Huge Hoax”. See: CLIMATECHANGEgate: The Global Criminal Conspiracy Hatched by the International Banking Cartel to Rule the World 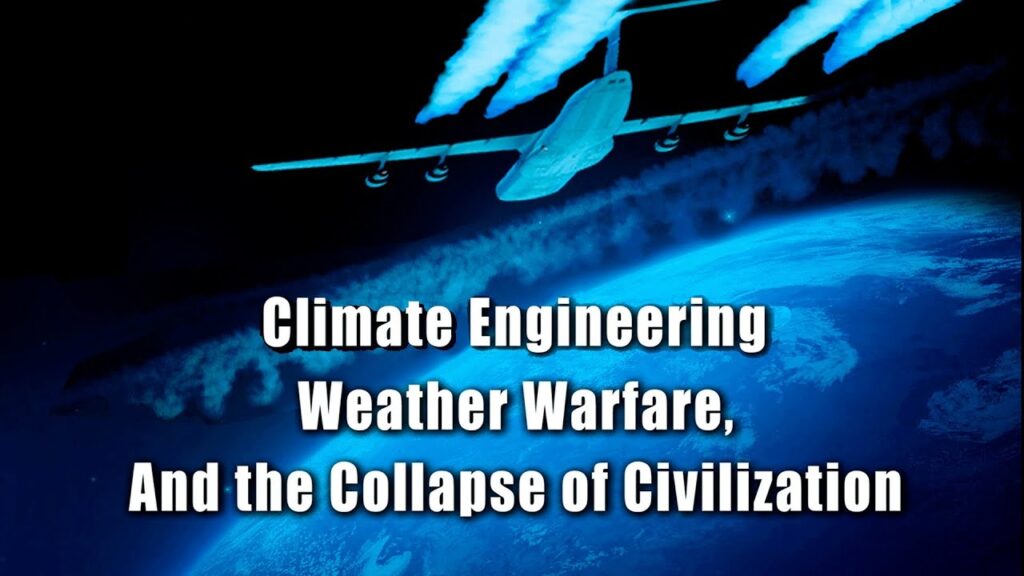 There is another major component to this geoengineered Climate Change fraud.

Extreme weather events are now routinely geoengineered and weaponized into what are essentially false flag weather attacks.  This highly destructive and deadly type of weather warfare is being used for several reasons.

First and foremost among them is the NWO manufactured need to advertise Climate Change as a real threat to humanity.  What better way to do this than to let loose a plague of violent superstorms, debilitating drought and deluges, as well as other devastating weather events around the globe.

This is how Mother Earth is being blamed for the “meteorological mayhem via false flags” that are really manufactured by the globalist-directed geoengineers.  In this way, nations everywhere are being misled in the camp of Climate Change whose fanatics are desperate to stop weather flux, some of which are totally natural, but most of which are manmade.

The following irrefutable and highly perceptive statement was made by Catholic nun and PhD scientist Rosalie Bertell in her ground-breaking book titled “Planet Earth, the Latest Weapon of War”.

Screenshot taken from: GEO-ENGINEERING & THE REAL WEAPONS OF MASS DESTRUCTION

It should also be noted that much of the weather warfare is being aimed at locations that have been targeted by the NWO cabal for specific reasons—political and governmental, economic and financial.

For example, two of the most destructive superstorms on to hit North America on record have occurred within the past couple of years.  Behind each of these calamitous weather attacks were hidden agendas that are explained in detail in the exposés posted below:

In point of fact, the geoengineers are now systematically taking control of natural storms, or fabricating them from scratch and amping them up into megastorms, just before slamming them into a targeted city, state or region of a country.

In this manner, nations are either compelled to stay on the NWO reservation, or coerced to comply with a cabal dictate that significantly advances their NWO agenda.

There is perhaps nothing more damning in the official record that proves the existence of this immense conspiracy to defraud humanity than the CIA’s memo titled “The Need For A Climate Control Study Program”.

This “sanitized version” of an official memorandum published by the C.I.A. clearly establishes the intent, strategy and tactics of their illicit scheme.  As follows:

The preceding CIA document from 1960 outlines the plan and ‘need’ for large-scale climate control initiatives with both civil and military applications.

Knowing that weather changes in the last few decades have been planned and then
actualized confirms that CO2 itself is not to blame for the now pervasive weather upheavals.

In their own words, we now know that the profound weather disorder was effectuated according to a master plan.  The key element of that NWO conspiracy was to create a new global bogeyman — Climate Change — that would sufficiently unite the world community of nations so that every country would eventually demand a One World Government. 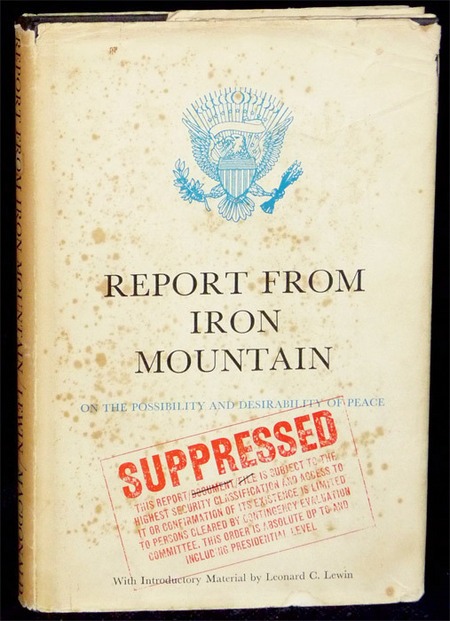 There is also the Report from Iron Mountain that clearly spells out How War Will Be Replaced By Environmental Destruction To Traumatize Humanity.

It is surely no coincidence that this top-secret and highly consequential government report first began to take shape in 1963, not long as the aforementioned CIA document was produced.

Clearly, this exceedingly elaborate and far-reaching conspiracy to deceive the American people was designed by the World Shadow Government as a means of coming out of their closet.  For their ultimate goal is to rule the world via a totalitarian and tyrannical government not too unlike the European Union, where citizens still think they have a voice but in reality they do not.

Toward that end, the primary purpose of a One World Government will be to act as the enforcement arm of the International Banking Cartel that greedily covets all of the natural resources on the planet. See: NWO Cabal Pursues Total Dominion Over The Earth’s Weather And Natural Resources

The NWO globalists know that they must also completely control the weather worldwide because of its enormous impacts on the land, sea and air.  Hence, numerous geoengineering experiments are now being covertly conducted on the land masses, in the oceans and throughout the atmosphere as a prelude to their future world domination.

The Carbon Control Matrix, which was fastidiously developed as a reaction to the fake Global Warming narrative, is just one glaring example of how the One World Government will react to these contrived crises.  The clandestine standing armies now supported by the U.N. will be used to police the panoply of new laws and statutes, rules and regulations, taxes and surcharges that are coming down the pike.

This is also why the various “agendas” were deceptively inaugurated by the United Nations.  For instance, Agenda 21, the 2030 Agenda for Sustainable Development and Vision 2050 were each implemented as a means to prepare (and especially program) governments and citizenries alike for this rapidly unfolding NWO paradigm.

The current trend of Climate Change hysteria will only get worse.  The globalists have never been so desperate to foist their warped vision on all of humankind.

Here’s just one example of how far the globalists will go to pull of this “Con of the Millennium”.

What the patriots can do in order to thwart this juvenile attempt to corral every inhabitant of the planet into the Climate Change pen of compliance is to disseminate information like this.  The more aware folks are everywhere of this demonic connivance, the more difficult for the perps at the top of the food chain to succeed.

In other words, shining the light of awareness on their exceedingly misguided project is the best way to terminate it.  The Truth Movement ought to come together in such numbers so that the raw people power poses a massive and monolithic countervailing force to their unending insanity.

We can all start by disseminating peer-reviewed scientific research papers such this one that provide hard evidence of the imminent dangers associated with weather modification and climate engineering technologies: Global Chemical Geoengineering Operations Now Pose the Very Real Prospect of an Extinction Level Event.

“The climate change hoax is the most complex and convoluted criminal conspiracy in world history.  The global warming scam is — BY FAR — the biggest boondoggle ever.  There’s not even a close second. What the globalists did, early on, was to entice everyone into some aspect of this fraudulent business venture.  The International Banking Crime Syndicate made sure everyone thought they could get a piece of the action.  Once they did, and it’s still going on, it was just a matter of executing the climate ruse.  Then, anyone without a conscience eagerly joined the climate change club.